about affliction, footprints and our walk with God 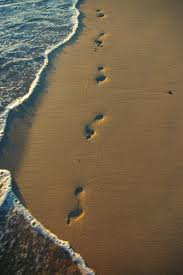 He whispered, "My precious child, I love you and will never leave you, never, ever, during your trials and testings. When you saw only one set of footprints, It was then that I carried you."
Margaret Fishback Powers, 1964
*******************************************************************************
“In the land of Uz there lived a man whose name was Job. This man was blameless and upright; he feared God and shunned evil” (Job 1:1). Job was a righteous man, and the Lord allowed Satan to strike him with grief and affliction in order to demonstrate Job’s great faith. He lost all his possessions, his entire family died, and his body was stricken with painful boils.
Despite this, Job did not give up his faith. His wife even tried to convince him to curse God but he would not. Rather, he declared: “The Lord gave and the Lord has taken away; may the name of the Lord be praised” (Job 1:21). The Holy Spirit indeed must have been with Job, where else could he have gotten the strength to endure Satan’s assault? Once it became clear that Job’s faith was stronger than any trial that Satan could muster, God declared that Job had passed the test. He commanded Satan to withdraw, restored Job’s health, and rewarded him with greater riches and family than he had before.
God’s righteousness is shown in his treatment of Job. Even though God allowed Satan to take everything from Job, He later rewarded Job greatly for his perseverance. Now, even today the story of Job is an example of how the Lord will never abandon his children. In this life, the Lord will give and the Lord will take away. If like Job we stay faithful no matter what, we will be greatly rewarded in the next life.


I have read the story of Job and have often wondered, why did God allow such merciless suffering on Job's part? I think also about Abraham...why, after wanting a child so much, did he wish to see if Abraham was obedient enough to follow through with the plan that God laid out to kill his own son?

Afflictions. They can be small, like a flat tire on a busy day. It can be big, such as a job relocation. Or it can be huge. An illness. Addiction. The death of someone dear to us.
Such is life.

I have received so many e-mails from people who ask me how they can help another who is addicted to alcohol. "I can't stand to see him suffer!" "She is so depressed, she can no longer see the way out!" "I can't take being married to this person any longer!" and so on.

As I mentioned before in an earlier post, Satan/Evil/Lucifer...by whatever name you know him by, he delights in our misery. He delights in our afflictions. "Give up, you'll never win!" he argues. And there Jesus is, shaking His head. He knew temptation also, in the desert.  Now one would think, this is God's SON..why didn't God just smite the evil one, then and there? I have often wondered this myself. Then I realized, if God chooses the outcome, we have all become His puppets. We have free will. WE choose the outcome. Be it for good or for bad, it is there to show us how strong we are against the struggles of life. We have to go through the dark tunnels to appreciate the light. Just as a baby must struggle to be born...or a chick struggles from the egg....or a butterfly struggles from it's cocoon, we all have those moments when, at the time, we think we just can't do this anymore! Yet when we look back, we can see how apparent it was that God was at out side, just as in the "Footprints" poem.

Have you called God into your life? Have you made room for Him in your world? If you have, the stresses of life won't hit so hard or sting for so long. The downs won't appear to be hopeless and the ups...why, you'll want to share the ups with Him in joyful song!

Be steadfast against afflictions! Be as Job was...know that even in the worst of times, you are NOT alone!
Amen!
Email Post 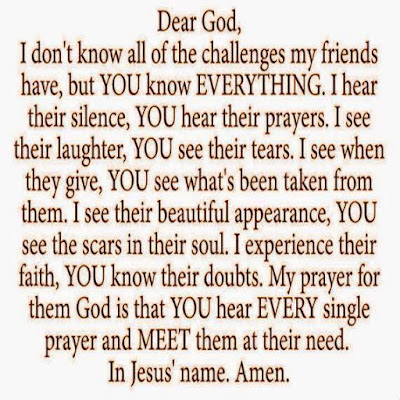 are YOU a friend to Jesus?